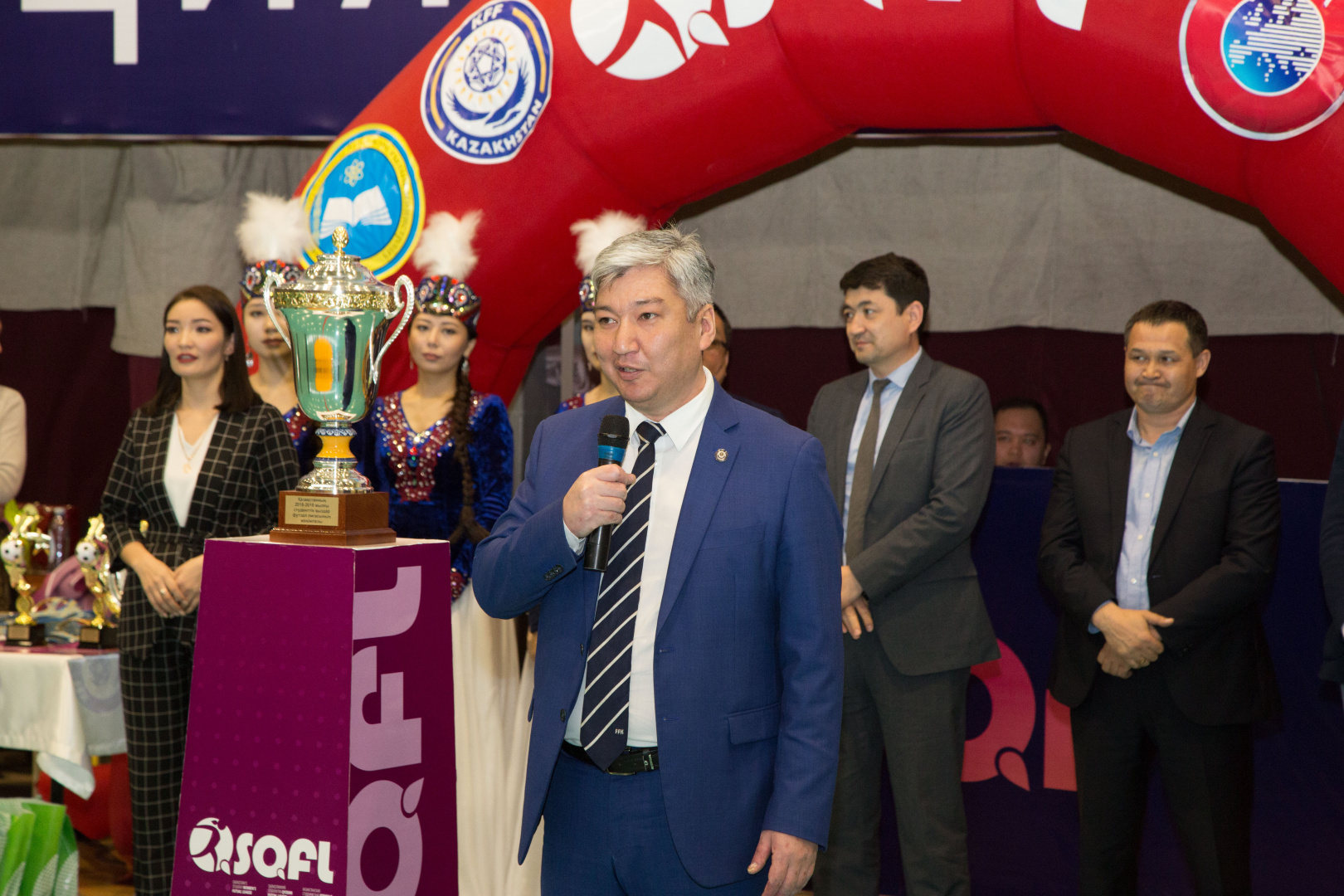 The KFF Grassroots Department director, Yerlan Jamantayev, in an interview with the KFF press service told about the work done since the beginning of 2019, and plans for the near future.

- Could you comment on the Futsal Student Girl League tournament that has been recently held?

- Our Department developed a project to create the Futsal Student Girl League and we received approval from UEFA for holding a tournament among girls aged 18 years and older. The preliminary stage of the tournament took place in the regions, and the final, with sixteen best teams took place in March in Nur-Sultan. The Kazakh Academy of Sports and Tourism from Almaty won the tournament. This tournament was held for the first time, and organized at a good level. More than 2,700 students took part in this tournament and this is a good news. Moreover, among students, these competitions produced a wide positive response, which, I think, will entail the development of futsal among students of universities and colleges of Kazakhstan.  In addition, the professional women's sports school 8 (Nur-Sultan) called up one of the players, Zhansaya Aubakir. So, the Futsal Student Girls League may open the door to professional women's football.

This tournament was held with the support of the Ministry of Education and Science of Kazakhstan. They will  support the tournament in the future to make these competitions annual.

- What other projects have been organized by the Grassroots Department since the beginning of the year?

We hope that next year there will be more participants, respectively, and competition will grow.

This year we have signed a memorandum with the party ‘Nur-Otan’ in the Karaganda region on the development of football among children with cerebral palsy. This project was launched in 2017 and we have already held two CP Championships.

This project continues its development and we hope that this will help the physical development of more children with such a diagnosis.

Also, today, the Grassroots Department is developing two more projects. We will tell about them later.

- What are your plans for the near future?

- We will have a very busy and tight schedule in the summer. Since May, it is planned to hold championships among amateurs, veterans and championships on beach football, women's football championships in age groups from 15 to 19 years old. The U17 women's teams started the championship earlier, as they need to take school exams.

- How are things going with beach football?

- The Kazakhstan Beach Soccer Cup will take place at the end of April. Last year's we reached success in the Euro League. Last year five teams took part in the Championship, and this year already eight teams will take part in the Cup. Some new teams are opening in the regions.

- What are the plans of the National Beach Soccer Team for this season?

- In the near future, we plan to hold a pre-season training in Kapchagai. The national team won the third place in last year's tournament in Europe and occupies the 23 in the ranking. In this regard, we will take part in the preliminary stage of the World Beach Games. The qualifying round will be held in the city of Salou (Spain), and the final will take place in October 2019 in San Diego (USA).

Kazakhstani referees work at Women's Under-19 Championship
KFF representatives take part in UEFA coaching workshop
Blind Football Project
Adilbek Jaxybekov: ‘Kazakhstan Cup is an excellent tournament’
UEFA financial affairs workshop Held in Nur-Sultan
Askar Abildayev: ‘Our goal is to qualify for the elite round of the 2020 World Cup’
Kazakhstan Futsal Championship winners awarded
Erzhan Musabekov: 'Implementing of a licensing system has had an impact on the development of football in Kazakhstan'
Kazakhstan national team one position up in the FIFA World Ranking
Arsen Inkarbekov: 'Kazakhstan is the third country in the CIS, where the UEFA A Elite Youth Licence course has launched'
Up