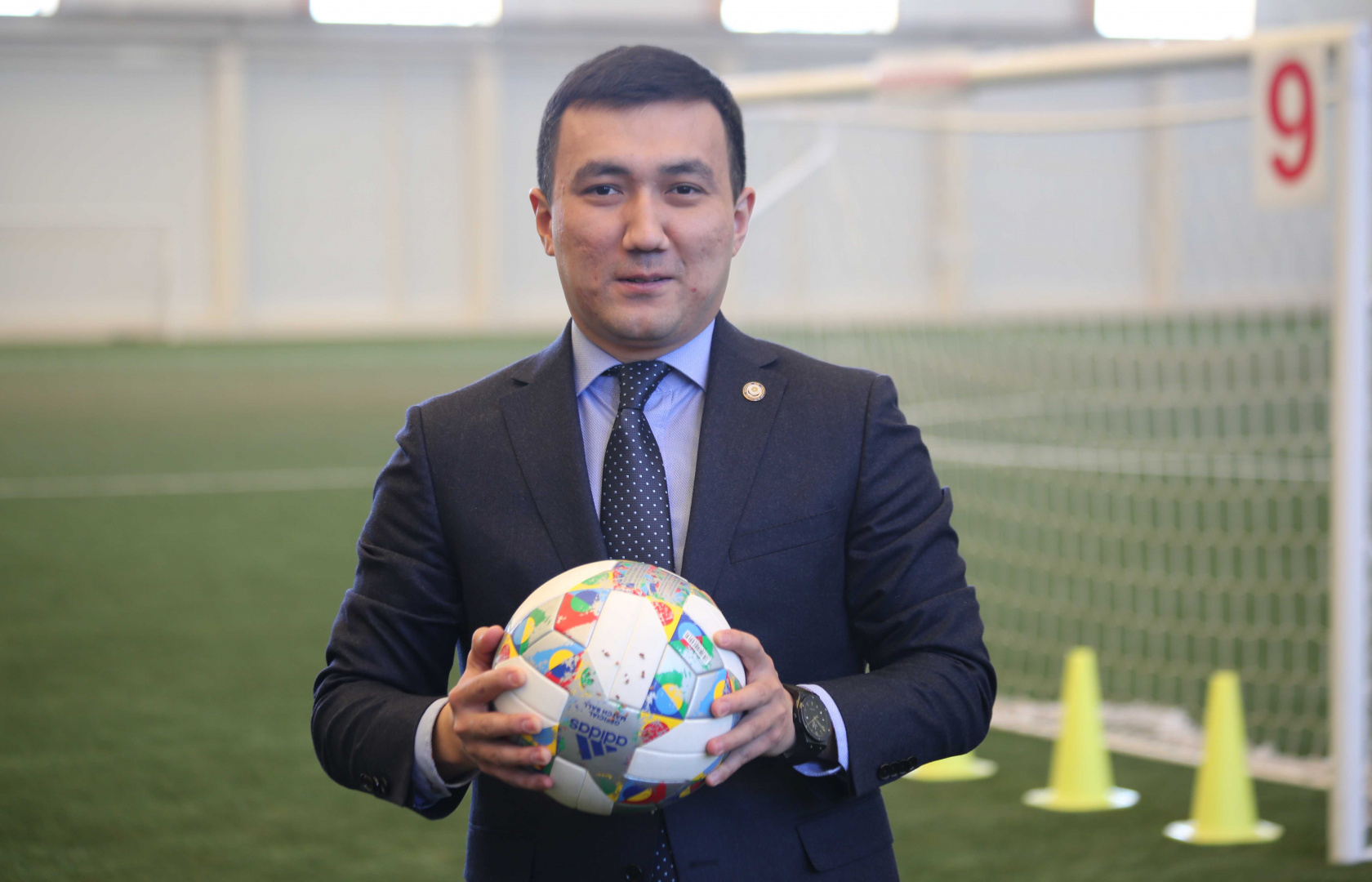 Director of the KFF Marketing and PR Department, Nagi Bakytbekov, told about modern marketing tools, noted the subtleties of the PR-service and shared his immediate plans.

- It's no secret that you worked in show business. Does previous experience help you now, and are there any similarities between football and show business?

- I have loved football since childhood. When I used to live in Kyzylorda, I tried to attend all the home matches of FC Kaisar. For more than 10 years I have been working in the field of show business, organizing events and television broadcasting. But at some point, the children's hobby turned into a fixed idea and I created the first in Kazakhstan information website about football - KazFootball.kz, in two languages. At the same time, I was approached by the leadership of FC Astana and we implemented several creative projects: we recorded the club’s anthem and made a video clip with participation of pop stars and football players, started using social networks to popularize the football club, and organized the RK Football Champions award ceremony several times.

In domestic football, everyone communicates with each other and my work could not go unnoticed. Thus, I received an invitation from the leadership of the Kazakhstan Football Federation. Football and show business have a lot in common, and the main feature is that people judge you by the results of your work. I realized that the laws of management and marketing are the same everywhere. I sincerely believe that my experience and my knowledge will be useful for Kazakhstan football.

- So, that is why the official website of the Kazakhstan Football Federation was updated ...

- The main reason was that the old website did not meet all modern requirements. In the summer of 2018, it was decided to renovate it. The design has become more modern, functionally it has become more user-friendly, the speed of loading pages has increased. The website is adapted for mobile devices. News on the official website, as before, are published in three languages ​​- Kazakh, Russian and English. Our department is trying to make the most important and interesting content. It is worth noting that the KFF projects are also available in our official website, where you can read about them, as well as download the necessary information.

- We live in the XXI century - age of innovative technologies. Therefore, it is necessary to create all the conditions for obtaining quick information. Own mobile application is available for free download on all devices supported by Android and iOS. The application has all the news from our official website. At the moment, more than 3,000 people have downloaded it in the Play Market and the App Store.

- What can you say about the social networks?

The number of followers is constantly growing. For example, 56,600 people subscribed to us on Instagram, 11,821 on Vkontakte, 2,209 on Facebook, 1,560 on Twitter and 11,082 followers on Youtube. Social networks not only duplicate the news from the website, but also create separate unique content for fans, as is customary throughout the world. We will continue work in this direction. -  Why did you deny accreditation to one of the sports journalists of Kazakhstan media before the match Kazakhstan - San Marino. What was the reason?

- Let's start with the fact that UEFA regulate the work during official matches in all qualifying matches. They control the press conferences, work in mixed and flash zones, media accreditation, and even the location of photographers around the pitch. To monitor compliance with the rules, the main football body of Europe sends its employees to all the qualifying games.

One of the journalists violated the UEFA requirement by taking selfies with players in the mixed zone at the UEFA EURO-2020 qualifying matches against Scotland and Russia. Mixed-zone is a special workplace of journalists, where they can interview football players after the match, but not to take photos with them. This zone is controlled by a UEFA representative. The sports journalist violated the rules of work in the mixed zone, repeatedly ignoring the requests of the KFF press service staff. This action entailed written warnings from UEFA, and another such letter would be punishable by a fine. Therefore, at the request of UEFA representatives, we were obliged to refuse accreditation to this journalist.

- It is gratifying that the official match program has changed for the better ...

- We have changed the format of the program. Now for journalists, the program is printed in A4 format on 30 or even 40 pages. But the most important thing is that the content has changed - 3-4 exclusive interviews, analytical materials and infographics are published in each program. From match to match, we try to improve the content of the program and make it more informative and creative.

- What could you say about our fans and supporters?

It is also important to note that, starting with a friendly match against Azerbaijan and Nations League, we set reasonable prices for tickets: the cheapest ticket cost 500 tenge, the most expensive - 3000. For the starting games of the EURO-2020 qualification against Scotland and Russia, we changed the price up to 5000 tenge. At the same time, the price of the cheapest ticket remained at the same level - 500 tenge.

For each match, the Federation distributes free tickets to veterans of the Great Patriotic War, retired and disabled people, and children under 7 years old can attend the national team matches for free. 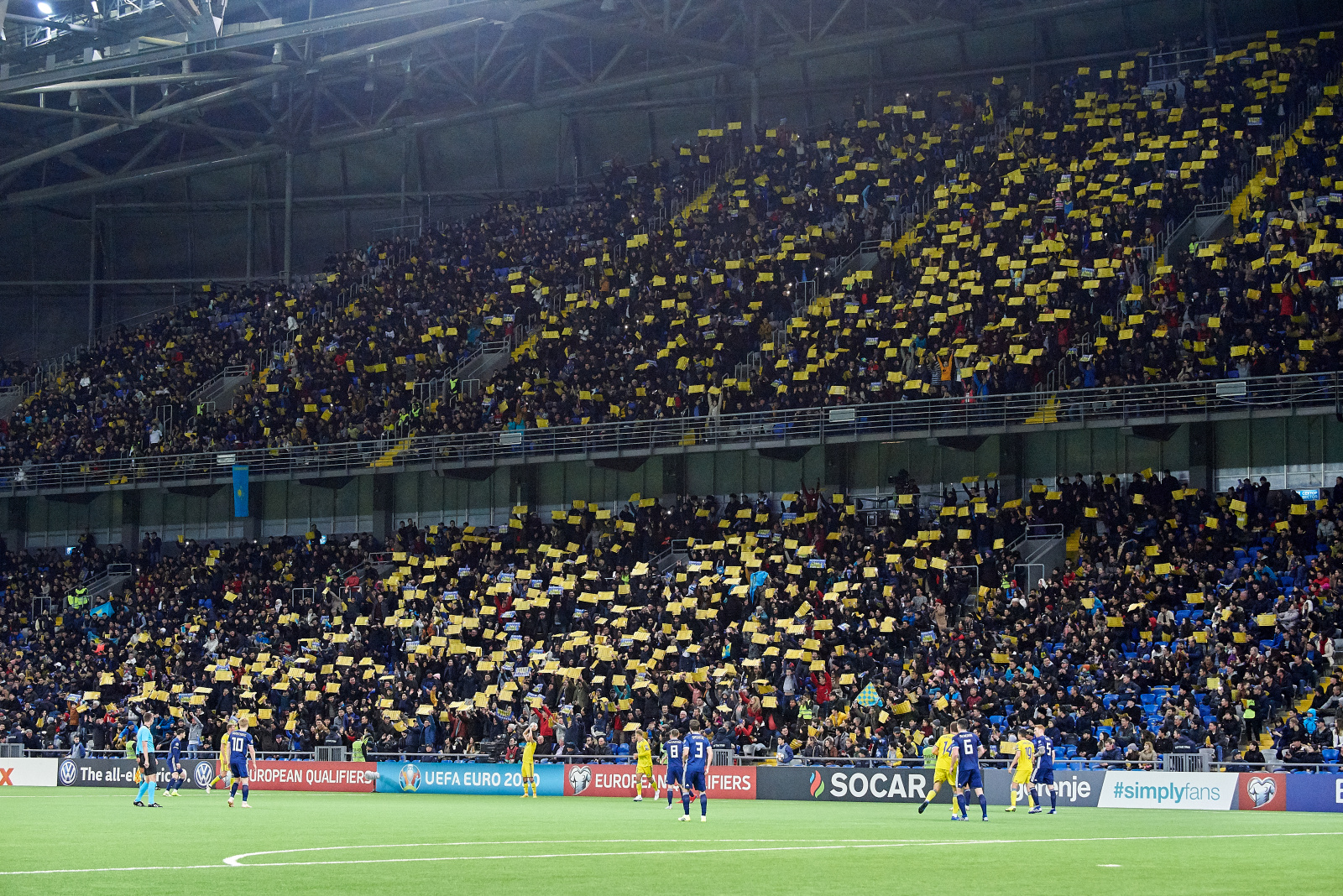 - Could you tell us about the pre-match campaign?

-  It usually starts in about a month before the match. Posters and billboards appear on the official website and social networks, we work with students of universities and cooperation with an active group of fans of the Kazakhstan national team. We also use targeting and organize various promotions.

You know, before the match of the UEFA Nations League against the Georgian national team, tremendous work was done jointly with PFLK to attract fans of Premier League clubs. Club fans came to the match from all over the country on club buses.

- Will your department improve work with the fans? Are there any promotions planned before the next home match?

- We want to increase the different activities around the stadium on the match day. We plan to hold various promotions and entertainment for children, and we also want to improve catering.

One of the main problems is that there are only two avenues to the Astana Arena stadium, and if fans do not arrive in advance, there will be lots of traffic jams around the stadium and huge queue at the entrance. I would like to appeal to the fans and to ask them to get to the stadium on time and watch the game from the first minutes. We had an idea to gather spectators an hour before the match, but, alas, it is impossible. The fact is that Astana Arena does not belong to the federation. We only rent it. The stadium has no modern technology at the checkpoints - this creates difficulties while checking tickets. We are considering ways to solve this problem. However, once again I ask the fans to arrive to the stadium in advance. 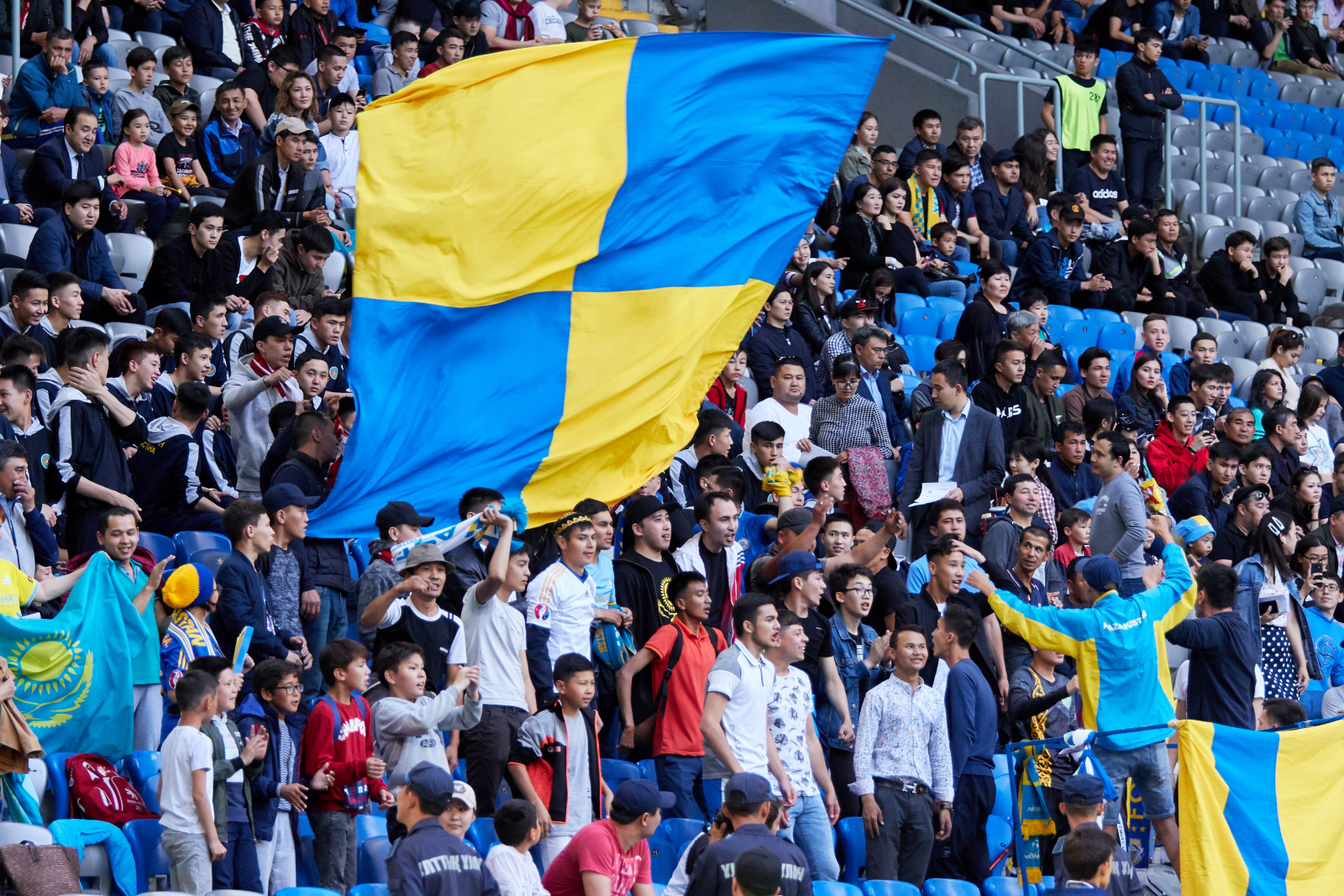 - It is clear that the Federation is doing a great job, but does it earn money?

- Modern football is a business. Therefore, we try to raise money from the sale of tickets and CIP boxes. The issue of earnings is very important, but prices will remain available for fans.

- Does the federation work with sponsors?

- Yes, of course. Last year, the National Welfare Fund Samruk-Kazyna was the KFF general partner, and also the sponsors were the Goal-Paz bookmaker office, the Technodom electronic store and ASU mineral water. In 2019, Samruk-Kazyna remains the general partner and ASU is the sponsor. While there are no other major sponsors. All sponsors who try to cooperate with KFF want to be advertised at the stadium during the official matches of the Kazakhstan national team. But we can not advertise anyone, since all commercial rights are transferred to UEFA.  There are only matches of the women's and youth teams. As for media partners, as I have already said, we are in contact with all the media, but at the moment a memorandum of cooperation has been signed with Qazaqstan Television Corporation, the Qazsport sports channel and Khabar Agency.

- Most recently you took part in the UEFA marketing workshop...

- The UEFA GROW seminar was useful because we discussed such important topics as how to attract fans to the national, women's and youth championship matches, organize various activities around the stadium for fans before and after the matches, improve the image of the federation on social networks. Participants shared their experience in their federations, and presented their projects in the field of marketing and PR. It should be noted that following the meeting, the Kazakhstan Football Federation received the opportunity to hold the next UEFA GROW workshop in Nur-Sultan in November 2019. 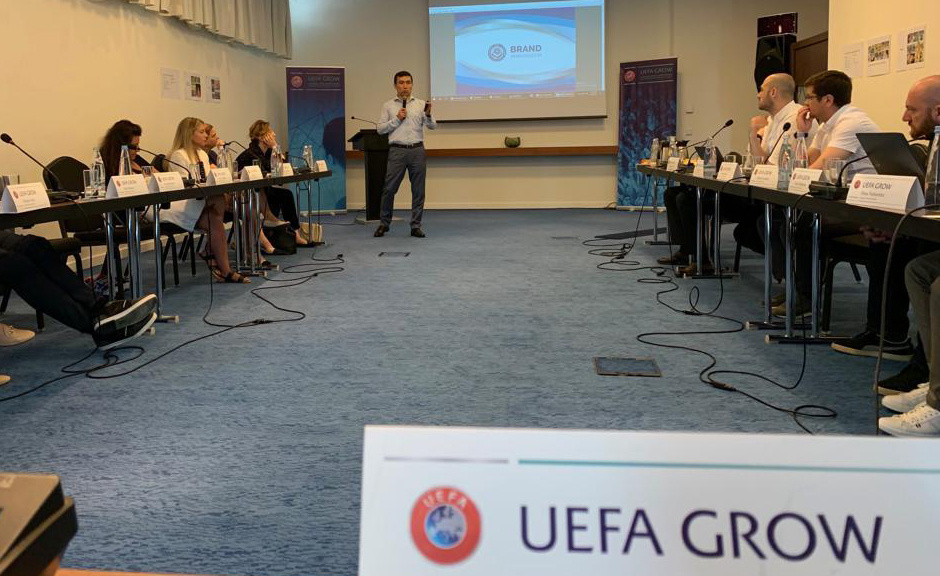 - Does KFF have any projects developed to raise the image of the organization?

- Our Department is also responsible for the image of the Federation. In order to improve the opinion on the Federation’s activities, to gather fans at the stadiums and increase the number of subscribers in social networks, last year the project 'Brand Ambassadors of the Kazakhstan Football Federation' was implemented. In July 2018, the Kazakhstan pop stars, starts of show business, TV and cinema signed a memorandum with KFF. They are such famous personalities as Meirambek Bespayev, Nurlan Koyanbayev, Yerkah Zekhmakh, Asel Sadvakasova, Luina, Nurzhan Kermenbayev, Zhaniya Dzhurinskaya, Gulnaz Zholanova, Nurlan Espanov, Marat Oralgazin, Ayan Birbaev, Aikyn Tolepbergen and Tauekel Muslim. The task of our brand ambassadors is to advertise the matches of the national team and popularize football on their social networks.

Our colleagues and fans expressed the opinion that KFF spends large fees to cooperate with these stars. In fact, all the above stars are engaged in public relations of the Kazakhstan national team absolutely free. We only cover the cost of travel, room and board. They agreed to take part in this project, because they are patriots of their country and want to support the national team.

How does it work? A few days before the match, our brand ambassadors on their social networks (each of the stars has 2-3 million followers.) publish photos and videos that are associated with advertising of a particular match, and also record videos, which call their followers to support the national team. And on the match day they also attend the match. This project has a positive effect, as the match attendance at home games has risen, and the number of followers of the official KFF social networks has also increased. I will not argue that this is entirely the merit of brand ambassadors, but the contribution is quite substantial. In general, some of our compatriots who did not previously enjoy football, now are interested more in the matches of the Kazakhstan national team. 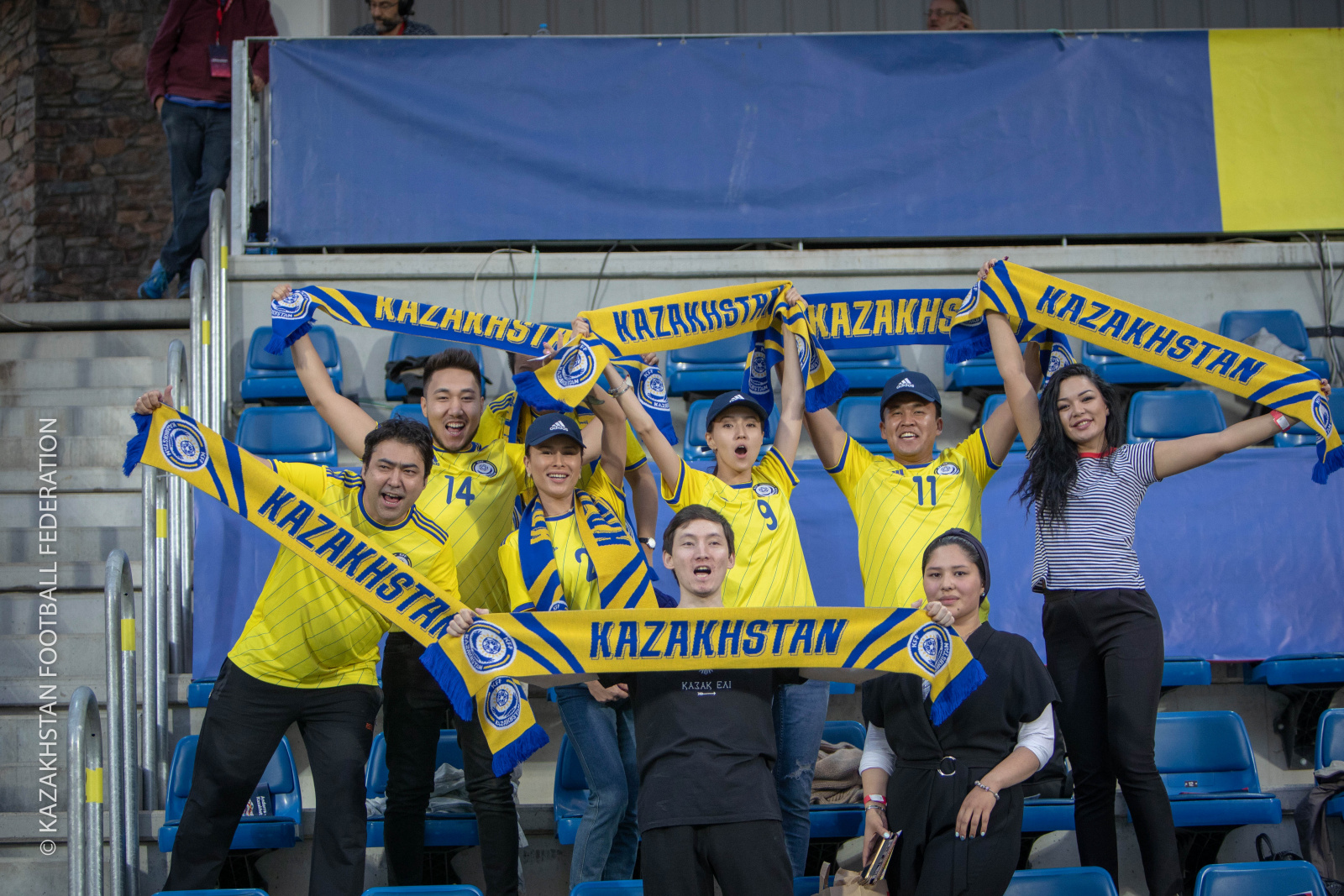 - I think many fans would be happy to open the fan shop of the Kazakhstan national team ...

- This year Kazakhstan Football Federation plans to open a fan-shop. Probably everyone knows that a few years ago the Federation had its own fan-shop, in the Khan-Shatyr shopping and entertainment center. But renting was expensive enough, so the Federation decided to close the project.

Now we are planning to open a new fan shop in the House of Football, where a special room is already provided. The fan-shop will sell such items as scarves, T-shirts, flags, mugs, keyrings and other souvenirs.